Gettin' it done and shippin' it out!!!

For those unaware I also do commissions. Lots and lots of commissions. Seriously, you guys keep me busy as I continue to whore myself out to the fan base.
My latest complete commission? Super cartoony Protector Armor. 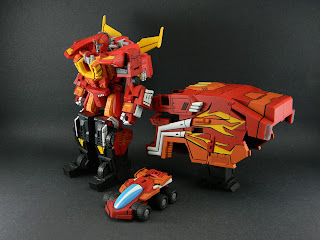 I didn't paint the Rodimus figure, that was sent to me like that. I was simply asked to make the armor/trailer match. While it's not something I would have done for myself it's certainly something I kinda enjoy looking at. Now I'm considering doing something with my City Commander...
Anywho, there's not a lot to discuss on painting techniques here. Lots of red, orane and yellow. White pipes and black panel lines. Covered the whole thing in a dull coat and we're good to go. Layering the red was the only huge pain in the butt.

I also wanted to talk about this piece which was already bought by the Allspark's own Razorsaw.
Banzai-tron!

This guy was a LOOOONG work in progress. It started out with a regular Drift figure that I managed to ruin while dying it as I had the heat up too high. The plastic warped and it was untransforamable after that. So yeah, I made an Action Master. Ha ha ha meh. It looked like poop but I tossed some colors on it to see how it would look.

Paint was thrown. Seriously, there was no effort put into this. That sat like that for... I dunno, how long ago did Drift come out? At least two years. Well about six months ago I decided to revisit this idea and turned this thing out.

Solid idea but I didn't like the way it was coming together. One night a thought hit me and I whipped out the dremel, gave my junker SG Cyclonus custom some surgery and one new head later...

Instead of black I used Model Master's Gun Metal which comes out as this very slightly metallic dark gray. I tend to use it a lot as it creates a better balance than regular black where black would seem applicable. I dry brushed the edges  with white I believe but don't quote me on that. I really don't remember if it was white or gray, I wasn't taking notes when I did this guy. I also made sure to paint the Target master in teh same scheme as his AM partner, Razor-Sharp, even though he has no beast mode. Ah well.
Grape Pearl, another of my favorite colors, was used for the hands, feet and thighs. The orange and green were from Citadel but they've since changed their names and formulas. They also give you less paint but I digress.

This guy here is one of my favorite customs. I'm glad to know he has a good home now.
Posted by Rob Roberts at 9:48 AM